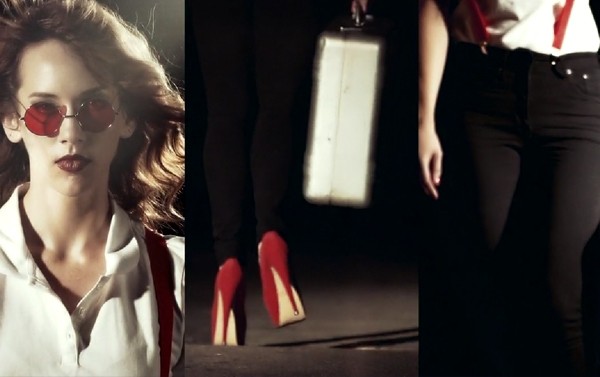 Each week, FRINGE MUSIC FIX culls the latest music video releases, carefully selecting the most bizarre, provocative, and remarkable videos from across the world.

Sit back, relax, and open your minds eye; things are about to get interesting. The following are our selections for the week ending June 15th, 2014.

Poliça recruit Marijuana Deathsquads' frontman Isaac Gale to direct the spiraling and seductive video for Shulamith bonus track "Raw Exit." The track features the charismatic Channy Leaneagh undergoing a series of wardrobe and wig changes in front of several rotating backdrops. Other things you can expect to see are a floating samurai sword, some striped ghost-like spirits, and a particularly awesome black light sequence featuring a pair of epic neon lashes.

Swedish electro pop duo jj and director Olivia Kastebring invite us on a tour of the disturbing and twisted confines of a mysterious mental hospital. As we make our way through the halls, we discover that jj band members, Elin Kastlander and Joakim Benon, have already checked in. The video serves as an extension of the recently released album trailer for jj's forthcoming album V, which featured similarly monochromatic visuals. As the track's titled would suggest, the video employs a saturated almost entirely white colour palette.

If youve been following my column this past year, it will come as no surprise that I have a massive soft spot for dance performance videos, especially those with a stranger undertones. Director Matthew Lessner and choreographer Princess Lockeroo have conceived one such clip with their impressive visual for Arbutus Records' signee Lydia Ainsworth. The visual features three talented female dancers equipped with finger lights and creative dance skills showing off their moves in a dimly lit warehouse. As the video unfolds, they are joined by a creepy straight jacketed individual who possesses his own unique brand of dance. Its an ominous and effective visual that serves to enhance the tracks haunting and infectious melodies and beat.

The Gia Coppola directed video for Blood Oranges Youre Not Good Enough holds onto everything weve come to expect from a Blood Orange video, from it's impressive dance choreography to it's retro inspired fashion. Gia is the granddaughter of Francis Ford Coppola and the niece of Sofia Coppola. She has recently directed a film adaptation of James Francos collection of short stories entitled Palo Alto, which featured musical contributions from Dev Hynes (Blood Orange). For Youre Not Good Enough," Coppola wanted to utilize dance elements as well as a live-TV styled presentation. The video takes place in a studio setting and features some behind the scenes footage which further emphasizes the live feel of the clip. Friends Samanthan Urbani, who is featured on the track, also co-stars in the video, sporting one of the coolest jackets ever.

Patrick Kenelly directs the dark and very intense music video for "Body & Blood" from left-field hip hop artist clipping. The split screen styled visual features a number of physically fit nude performers in various states of distress, strain, or discomfort. Drug use, sexual fetishes, and torture are also implied and contribute to the visuals crude, raw, and unforgettably bold presentation. Back in May, clipping. released another of our favourite music videos with the Carlos Lopez Estrada directed video for Work Work. Both songs can be found on clipping's fantastic CLPPNG album.