But then there are those videos in music video history that I can only describe as - insane. Videos that, for whatever reason, were made in circumstances that created something so beautifully inane that it almost defies description. We've taken a look at some of these videos, and today we're watching what I consider to be the crown jewel in this video category, 1991's "2 Legit 2 Quit" by MC Hammer, directed by Rupert Wainwright.

You'll need about 15 minutes to watch this video. I'll be waiting when you get back.

Let's start with the time and place that this video happened. In 2014 we tend to think of MC Hammer as a punch line, but in the early 1990s, MC Hammer was an extremely popular act. "2 Legit 2 Quit" was the first single off of his third album. Reportedly, MC Hammer and Michael Jackson were friends, and sometimes seen as competing at the same level around that time period. Anyone writing off Hammer as a one hit wonder is ignoring the cold stare of history.

You can see why, around this time, Hammer felt a video of this scope might be necessary. Large-scale videos like "Black Or White" were becoming the thing to do. People were making video games into feature films. Crazy was in the air.

Hammer certainly wasn't discounting himself at this stage of his career. He decided that he wanted to challenge Michael Jackson to a dance off. It never happened, of course, but knowing that makes this makes the video make more sense. Sort of.

The video starts out with a news report - Jim Belushi tells us that MC Hammer has quit. Quit something. We then go into a sequence featuring Belushi plus a bunch of stars like Danny Glover and Capital/EMI CEO Joe Smith doing some ad-libbed bits about Hammer quitting the something. This goes on for a very long time and occasionally veers into the surreal. R&B singer Ralph Tresvant has a long, bizarre monolog about MC Hammer being a cyborg. Four young men identified only as "The Boys" (I'm not looking it up) also mourn Hammer quitting. For what it's worth, Danny Glover refuses to believe that Hammer quit. He tells us we must have our information wrong.

We are then taken to a concert where everyone is expecting Hammer to show up. The concert promoter is very scared about this, and is standing inside the venue fretting about whether MC Hammer will perform - something he is hopefully contractually obligated to do. Everyone is bored and restless. Where is Hammer?

Although a little strange, until now things are following a basic plot and sort of make sense. At this point, all of that is thrown out the window and we enter crazy town. We are taken to a dark and spooky mansion that is the home of soul singer James Brown. Brown is on a throne in a throne room, and underneath (maybe) Hammer is working out for some reason. After getting his swell on, Hammer, shirtless of course, knocks on the door and asks "Godfather, can I enter." Brown says yes, and MC Hammer walks in to ask if he is "ready" for ... something.

It's important to note that nothing MC Hammer says in this video makes any sense at all. Here's a sample line of dialogue:

"I've waited so long for this, and now it's time, for me to go out and take the respect and propers [Doug says this is long for 'props'] that you've earned, which one man refuses to give to you."

What has Hammer waited so long for? He is clearly playing himself in this video, and he's had a successful career up to this point. He has a stadium full of people waiting for him to perform. Nobody seems to be doubting his abilities. Who earned the respect? James Brown? Who refuses to give the respect to James Brown? 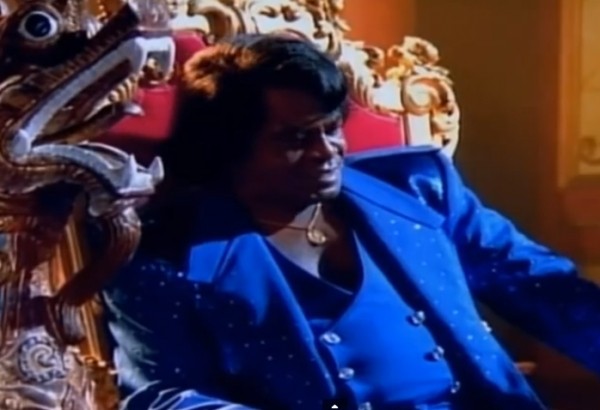 According to director Rupert Wainwright, this was filmed the day James Brown got out of prison for assaulting a police officer. MC Hammer's plane picked him up at the prison and flew him to LA for the shoot. Let's pause for a moment and think about what a mindfuck this must have been for James Brown. You are in prison for three years. You are released, and flown to a set where a shirtless man is telling you that that he is going to avenge the propers that were never given to you by an unnamed stingy proper giver.

No time to reflect on that though, because James Brown says he's almost ready to go out and perform his contractual obligations for money, but before that James Brown must shoot MC Hammer with a ball of fire that carries him around the room.

Here we get some clues. Brown says "be strong godson - the gloved one is not a sucker." Is he possibly talking about Michael Jackson? This seems the most plausible. So MC Hammer is going to steal Michael Jackson's glove? Did Michael Jackson not give propers to James Brown?

One final blast of fire creates a set of backup dancers and burns sunglasses onto MC Hammer's face.

James Brown then tells him to make sure to steal Michael Jackson's glove, prompting MC Hammer to utter one of the greatest lines of music video history:

James Brown then levitates the entire group with this groundbreaking effects shot:

As they are transported in a ball of white light, things at the venue are not going so well. People have apparently identified the concert promoter and are clawing at him for their money back, as is normal protocol for a cancelled show. Suddenly, Hammer appears! He is transported onto the stage and starts the show (as he is contractual obligated to do and gets paid for).

The show is going on, but this video will not be contained to one single venue. The ball of white light starts traveling around, popping up out of manholes and bathing people in its glorious white light, causing a handful of quasi-religious experiences. This is an actual still from this video: 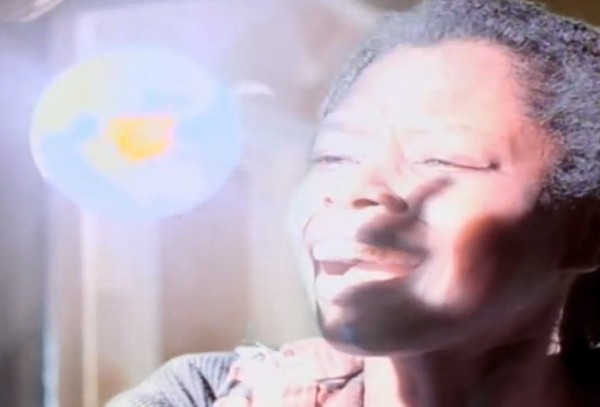 The next few minutes is a blur of dancing and chaos. Then after the video has ended, we are taken to some sort of tv control room with a bank of monitors. A man in a suit is impressed, but says Hammer is no threat "to us." As the camera pulls back, it's clear that the "us" is actual him and someone playing Michael Jackson. Jackson does the "2 Legit 2 Quit" hand signal, and the camera zooms in a TV monitor featuring a maniacally laughing James Brown. End scene. 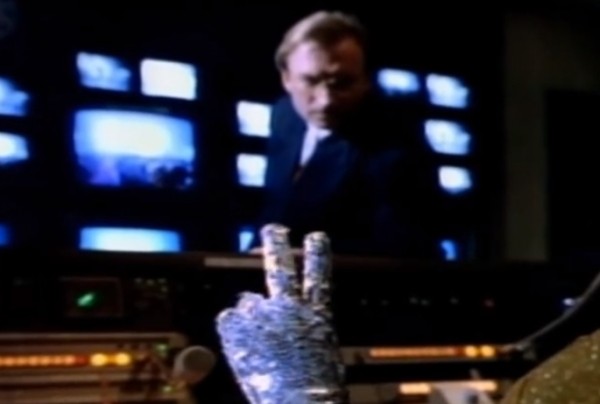 For a 15 minute long video, there is surprisingly little going on that serves a greater plot. In fact, even after knowing that Hammer wanted a dance off with Jackson, this video still doesn't make any sense. Nobody explains why Hammer "quit" or what he lacked that James Brown needed to give him. Brown wants Michael Jackson's glove but Hammer never even sees Jackson or takes his glove. Maybe we're left to wonder what will happen next. Sadly, a sequel was never released.

One thing is certain, though - James Brown is amazing in this video. He delivers every inane line in the most James Brown-siest way possible, and is refreshing a counter to Hammer's bizarrely serious performance. He is without a doubt the highlight.

And even if it makes no sense, this video is pretty fantastic. The attention to detail is fitting of a video that reportedly cost $3.5 million in 1991 dollars. See, for instance, the peacock in Brown's mansion, or the MC Hammer toy that begins to have its head spin when Hammer enters the venue in a ball of light. Rupert Wainwright was a longtime Hammer collaborator at this point, and you can tell both he and Hammer were having a lot of fun. I also recommend reading For the Win's story on this video, which includes some details about Brown using Hammer's jet to go to Vegas.

If you have a more insane music video, I'd like to see it. Until then, it is written. Hmm.

Posted by Adam Fairholm on April 1, 2014 in Music Video Relapse

As we've covered on the blog before, ABBA has an interesting history with music videos, using the form back in the late 1970s to spread their music to overseas markets. The videos, while pretty primitive, are well-done for their time, and they are almost all on their ABBA Vevo account,… Read More

Posted by Adam Fairholm on March 31, 2014 in Music Video Relapse

When a video gets pulled off of YouTube, they usually tell you who made them do it. Usually it's a record label, but sometimes it's a random name. For instance, Iggy Azalea used to have a video called "Pu$$y," but it now says "This video is no longer available because… Read More

Posted by Adam Fairholm on March 18, 2014 in Music Video Relapse

People whose jobs revolve around throwaway "viral" stories hit pay dirt last week when someone noticed that a radio station in LA was playing Nelly's 2002 hit "Hot In Herre" over and over again. This is apparently relatively standard procedure for radio stations undergoing a format change (it has since… Read More

Posted by Adam Fairholm on February 26, 2014 in Music Video Relapse

A Noisey article from last week made a pretty good point about Katy Perry music videos: "as far as music videos go, Katy Perry seems to have two speeds: sad, and batshit fucking crazy." The article was about her "Dark Horse" video (a video that is definitely evidence for their… Read More

Content on the IMVDb blog is ©2012-2023 IMVDb and FilmedInsert, LLC. All Rights Reserved.