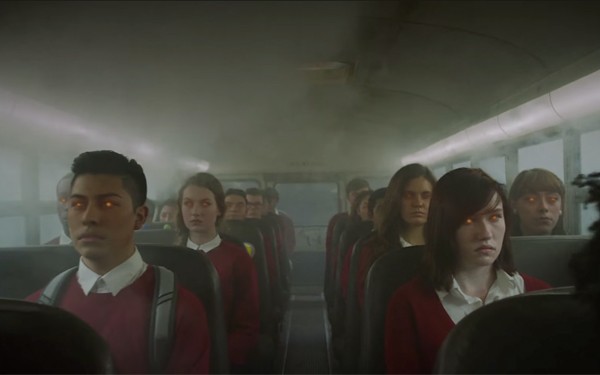 The new video for "Break Yourself" from Australian producer Hook N Sling, with vocals by Far East Movement, is nothing short of uniquely visionary and ambitious. Its a kind of dystopian fantasy that plays off of the students perspective of the educational system, similar to the all-too-familiar high-school themed rock videos from the 80s. The loose narrative combined with repetitive camera movements from the front to the back of a smoke-filled school bus creates a nostalgic deja vu that anyone who used the public school transit system can easily relate to. The familiar movements might give you chills of how many times youve made that walk, and what kind of things any given person could see  one person might see a legion of dead-eyed robots, while another sees a bus filled with ageless stereotypes.

What makes this video stand out to me is the full treatment they give to a limited space. Ive seen party bus videos before (anyone remember PODs "Rock the Party"?), but this one packs several different ideas into one bus, utilizing somewhere in the ballpark of 50 actors. They do each situation up to the fullest, going from a normal school bus, packed with jocks, cheerleaders, and whiz-kids, to a Catholic priest literally preaching to the choir (complete with incense-swinging altar boy), to a row of empty seats that stretches on to infinity. The choreography is on point, too; all the actors are playing to the camera movements, and the mouths of a few choice actors mouth the song perfectly.

Directors Carlos Lopez Estrada and Nelson De Castro really did this Hook N Sling track justice, perfecting the seamless editing transitions and camera movements which increased the surreal feeling, and matched the repetitive, weed smoking nature of the song. The complex camera movements were no stranger to De Castro, diving into some ambitious moves in his other vids, including Machinehearts "Circles" and Digitalisms "Wolves." Estrada also made waves this year, putting out a very bold, privacy invading (was arrested during filming) project for Clippings "Summertime"  filming people on the street, and superimposing jumbled face parts over theirs to create a very unique and disorienting take on a rap video. Cant wait to see these guys collaborate again in the future!