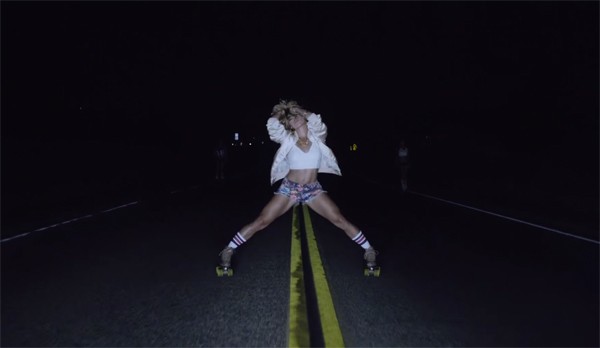 Its impossible to make a music video that takes place on a dark highway without drawing comparisons to Karma Police by Radiohead. Thats why its no surprise that a lot of the articles covering director Hiro Murais new video for Gold by Chet Faker reference the 1997 Jonathan Glazer classic. While Gold has a similar vibe and location to Karma Police, Hiro is able to create something completely new and unique with those elements  adding choreography, style, and sexiness to the mix without losing any of the minimalism or intrigue.

Familiar to anyone who has taken a road trip at night, the video opens on the seemingly endless yellow lines going down the center of a highway. Three ladies on roller skates emerge from the darkness who are all impossibly sexy, cool, stylish, and talented at roller skating. Choreographed by Ryan Heffington, the ladies begin dancing as they continue to roll down the dark road, lit by what feels like car headlights. The video looks like a one take, but likely has a few hidden cuts that allow for much more drastic camera movement than youd expect from a video thats quickly tracking backwards the whole time.

Many of Hiros recent videos feature the artist in an unusual, sometime dangerous scenario that seems peculiar to the viewer but familiar to the artist. In Gold, the skaters path eventually leads them to Chet, revealing him in a situation thats much cooler to see than read about.

Gold was produced by Kimberly Stuckwisch for Doomsday Entertainment and can be found on the album Built on Glass.