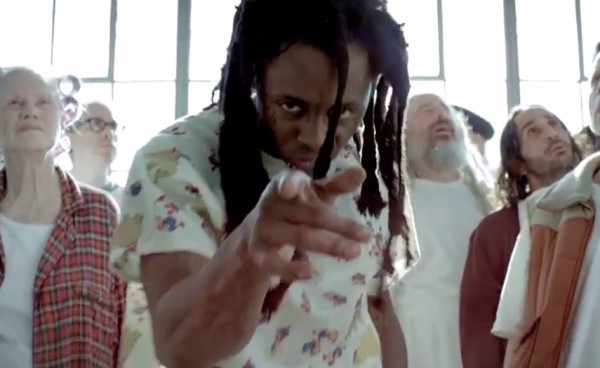 Lil Wayne has always been down to play with the idea that he is a little off. He's had albums with titles like I Am Not a Human Being, and a few months ago he was definitely the most unhinged of the Young Money participants in "Senile." But Lil Wayne takes it to another level in his new music video for "Krazy," directed by Colin Tilley, stripping out all of the color and setting the entire video in a bleak mental hospital.

Inspired by the 1975 film One Flew Over The Cuckoo's Nest, the video takes place entirely in a mental institution that features Lil Wayne as a new patient. As you might expect, a mental institution isn't a super fun place to be, and Tilley runs with this, creating some relatively disturbing conflicts between him and other mental patients. This definitely isn't the styled mental hospital of something like "Martians vs. Goblins" - true to the film inspiration, everything is kept mostly realistic, with some breaks for Lil Wayne to play in a padded room and an execution scene at the conclusion of the video.

The video for "Krazy" was produced by Jamee Ranta for London Alley Entertainment. The track is available as a single now.