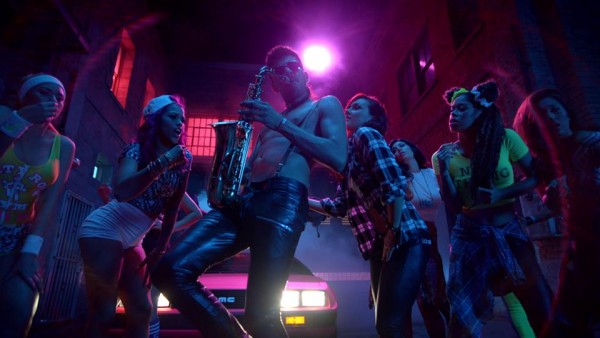 The first guests on our inaugural podcast episode back in in February 2011  then called The FilmedInsert Podcast  was director Mike Diva (who joined us along with PDFlo and Josh Harraway). One of the things we talked about in that episode what Mikes prank video Sexy sax man serenade, which featured saxophone player Sergio Flores dressed in a ridiculous wig and suspenders, going around playing Careless Whisper by George Michael in the middle of restaurants, classrooms, and discount clothing stores all around LA. Since that time, Sergio has taken this Sexy Sax Man character and run with it, making appearances on Late Night With Jimmy Fallon, landing a sponsorship with Oleg Saxophones, and staring an international saxagram delivery service. And now, thanks to the New Thang video, we can also add starring in a Redfoo music video to his list of Sexy Sax Man accomplishments.

Directed by frequent Redfoo and LAMFO collaborator Mickey Finnegan, the video opens one a street corner with Foo and a bunch of fly ladies. In classic Redfoo fashion, everyone who appears in the video begins to dance, and everything seems perfect in Redfoos world. That is, until the horns kick in on the song and the Sexy Sax Man shows up. His leather pants, missing shirt, and hip thrusts are too much for Redfoo to compete with, and all his ladies leave his side to fawn over Sergio. Try as he might, Foo cant compete with The Sax Mans saxiness. Until, of course, Foo gets a sweet sax of his own, and that mixed with his trademark shufflin' is enough to win his babies back.

New Thang was produced by Jenn Khoe for London Alley Entertainment and can be downloaded as a single now.